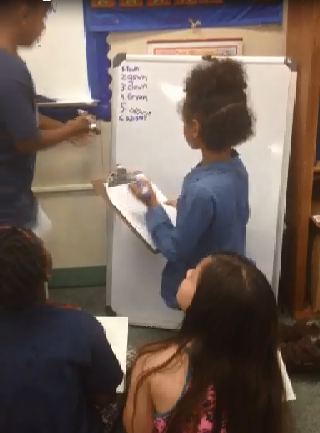 Say it * Chop it * Say it is a phonemic awareness activity that incorporates sensorial movement which helps young learners segment a word (break a word into phonemes). I developed this activity while teaching kindergarten and have used this activity with TK, K, and 1st grade students. The words choice is geared to the level/ability of the group of students or student I am working with ( I always aim for the students zone of proximal development which increases the challenge just a bit above their capability.) One advantage of this activity is that is doesn’t require extra materials and can really be done anywhere.

Here is an example of Say it, Chop it, Say it using the word camp:

**Chop Hand Movements: This is the sensorial: kinesthetic, touch, visual, and auditory, representation of segmenting, breaking, or “chopping” the word into individual phonemes (units of sound). Hold your hand, palm up in front of you. With the other hand, make a chopping movement, hitting the palm of the other hand, as you say each sound

*Depending on the difficulty of the word, the teacher may need to segment (chop) the word with the students until they develop stronger phonemic awareness skills and are able to “chop” the word

1. During dictation and spelling practice, I add a phonics component. Now the activity becomes Say it, Chop it, Say it, Write it. Writing the letters turns a purely phonemic awareness lesson (just phonemes/sounds) into a phonics and/or sound spelling lesson (sounds are now connected to letters). Depending on the lesson, the group of students or student, and the level of difficulty, I may have the students chop the word and write the whole word or chop the word and write the letter or sound spelling of the particular phoneme immediately after the phoneme is spoken. For example, if the word is cat, first grade students should be able to write c,a,t after chopping the word. On the other hand, kindergarten students will probably need the teacher to stop after each phoneme: /c/… write the letter for the sound /c/; /a/… What letter makes the sound /a/?…Write it. /t/… What letter makes the sound /t/ ? Write it.

Are you familiar with Whole Brain Teaching? Did y

Hang in there! Can you see the light at the end o

What are your plans this weekend?

Hope your day is out of this world! #MayThe4th #ck

We hope you are feeling the appreciation this week

Friday the 13th....... Full moon..... Do YOU believe it affects your students? We want to hear about it 👇🏽👇🏾👇🏼 Drop a comment! Happy Friday! #ckalovesteachers #iteachk #iteachfirst #earlychildhoodeducator ... See MoreSee Less

Are you familiar with Whole Brain Teaching? Did you know that there are TONS of free resources on the WBT website? Check it out: wholebrainteaching.com/ #WholeBrainTeaching #ckalovesteachers #tuesdayteachingtip ... See MoreSee Less

Paid summer PD opps, Galileo Learning hiring Kinder educators nowGalileo Learning is looking for exceptional leaders, changemakers, and educators to join their team! We're hiring instructors and Assistant Program Directors for our in-person and COVID-safe innovation education STEAM summer day camp programs for kids in the community. Receive personalized professional development, and get paid to get trained while having a joy filled summer inspiring future innovators! (Shorter 2-3 week opps available and receive free camp for your kids.) We have 60+ sites in the SF Bay Area and Southern California, so for more job info or to apply, click here. Next application deadline is Sunday, May 8th so apply asap! For questions, email us at jobs@galileo-learning.com. ... See MoreSee Less

Hang in there! Can you see the light at the end of the tunnel? We can! How many days do YOU have left? #ckalovesteachers #iteachk #iteachfirst #almostsummer ... See MoreSee Less