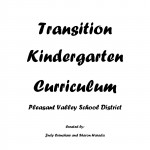 Pleasant Valley School District in Camarillo, California has put together a Transition Kindergarten Curriculum to support their current kindergarten curriculum.  They designed it to incorporate the same themes the Kindergarten teachers are teaching in language arts from the Houghton Mifflin adoption so TK teachers would be included in kindergarten planning times.  They used Big Books that have been previously used in the district to support the language arts and science and social studies themes each month.

Instead of alphafriends, they chose Zoophonics as the letters and sounds and phonics program (district preschools also uses Zoophonics).  They did backwards mapping of math and used common core standards and a lot of Math Their Way and Developing Number Concepts by Kathy Richardson to support math. Harcourt Brace is the kindergarten adopted program and they listed it to comply with Williams Act.  Science and Social Science curriculum are supported developmentally through themes, however the adoptions listed are in regards to Williams Act.

Click here to view the TK big books and literature used to support the monthly curricular themes.
« September 2012 Enews
Here We Go Round the Apple Tree – An Active Way to Get Ready for Fall »

We hope you decide to accept our invitation to joi

Tina Gabel will share 5 simple steps to create a c

Register for this Panel Discussion with TK leaders

Our Summer Series BLASTS OFF on July 6th! Our fir

Whether you are already enjoying your Summer Break

Don't stress! If you are not feeling ready for a new school year, we are here for you! With SIX live sessions (don't worry.... they will be recorded for future viewing) we have you COVERED. Join us starting July 6th at 4PM. 👇🏼👇🏾Get more information here👇🏼👇🏾californiakindergartenassociation.org/professional-development-workshops/ ... See MoreSee Less

Psssst...... spread the word! The California Kindergarten Association has BIG THINGS planned to support ALL our members! We are your go-to source for high quality professional development. Start the year confidently and feel supported!californiakindergartenassociation.org/ ... See MoreSee Less