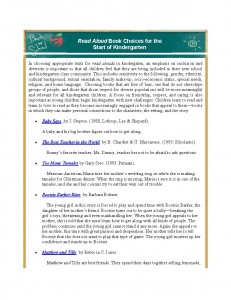 Read Aloud Book Choices for the Start of Kindergarten

In choosing appropriate texts for read alouds in kindergarten, an emphasis on inclusion and diversity is important so that all children feel that they are being included in their new school and kindergarten class community. This includes sensitivity to the following: gender, ethnicity, cultural background, sexual orientation, family make-up, socio-economic status, special needs, religion, and home language.  Choosing books that are free of bias, one that do not stereotype groups of people, and those that show respect for diverse populations will be more meaningful and relevant for all kindergarten children. A focus on friendship, respect, and caring is also important as young children begin kindergarten with new challenges. Children learn to read and learn to love to read as they become increasingly engaged in books that appeal to them—books in which they can make personal connections to the characters, the setting, and the story.

The Best Teacher in the World  by B. Chardiet & G. Maccarone. (1995: Scholastic).
Bunny’s favorite teacher, Ms. Daracy, teaches her not to be afraid to ask questions.

Too Many Tamales by Gary Soto. (1993. Putnam).
Mexican-American Maria tries her mother’s wedding ring on while she is making tamales for Christmas dinner. When the ring is missing, Maria is sure it is in one of the tamales, and she and her cousins try to eat their way out of trouble.

Bootsie Barker Bites  by Barbara Bottner
The young girl in this story is forced to play and spend time with Bootsie Barker, the daughter of her mother’s friend. Bootsie turns out to be quite a bully—breaking the girl’s toys, threatening and even manhandling her. When the young girl appeals to her mother, she is told that she must learn how to get along with all kinds of people. The problem continues until the young girl cannot stand it any more. Again she appeals to her mother, this time with great passion and desperation. Her mother tells her to tell Bootsie that she does not want to play that type of game. The young girl musters up her confidence and stands up to Bootsie.

Matthew and Tilly  by Rebecca C. Jones
Matthew and Tilly are best friends. They spend their days together selling lemonade, playing games, and enjoying each other’s company. One day, however, Matthew and Tilly have an argument over a broken crayon. The argument escalates into name-calling, and finally they decide to separate. While playing alone each child initially relishes having things his own way but soon realizes that experiences are more fun when shared with a friend. Apologies are made, and soon the two friends are playing together again.

The Stonecutter by Demi (1995, Crown).
A stonecutter desires to be something or someone other than himself until one wish too many teaches him a valuable lesson.

Anna Banana and Me by Lenore Blegvad. (1987/1999, Aladdin).
Anna Banana is a fearless young girl who plays with a timid boy and eventually becomes his friend.

Stellaluna by Janell Cannon (1993, Harcourt).
Stellaluna is a young bat who learns to survive by adapting to her new life with a family of birds. She also learns about friendship and respect for others.

Verdi by Janell Cannon ((1997, Harcourt).
Verdi is a bright yellow snake who does everything he can to prevent himself from turning green like the old snakes. When Verdi does turn green, though, he learns to respect the elders and discovers that what matters most is what is on the inside.

Crickwing by Janell Cannon (2000, Harcourt).
Crickwing is a cockroach with a crooked wing who likes to pick on leafcutter ants. Over time, he comes to realize the ants are a sophisticated colony that works cooperatively; he gains respect for them and stops his bullying.

Arnie and the New Kid by Nancy Carlson (1990, Viking/Penguin).
Phillip is the new kid in school. He sits in a wheelchair and needs help dong some things. Arnie teases Phillip for being different, until Arnie has an accident himself.

Big Al by Andrew Clements (1997, Simon & Shuster).
Big Al is a very friendly fish, but the smaller fish are afraid of him because of his huge size. By the end he manages to show them that he is really nice.

Chrysanthemum, by Kevin Henkes (1991, Greenwillow).
Chrysanthemum used to love her name until she started school and the other children made fun of her for being named after a flower.

« Number Rhymes Make Learning Numbers as Easy as 1, 2, 3!
Make Your Shelves Colorful with These Great Books for Teaching Colors »

Today is the LAST DAY of our Black Friday sale! Ch

We are grateful for our members dedicated to givin

WHY WAIT until Friday for a great deal? Our Black

To all the amazing educators who teach kindness EV

Today is the LAST DAY of our Black Friday sale! Check it out! californiakindergartenassociation.org/ ... See MoreSee Less

We are grateful for our members dedicated to giving it their all EVERY day! We are thankful that California's youngest students have YOU! Happy Thanksgiving from the CKA Family. #ckalovesteachers ... See MoreSee Less

WHY WAIT until Friday for a great deal? Our Black Friday Sale is on NOW- and it will run the WHOLE WEEK! From Nov. 23- Nov. 30 you can get $30 off your #ckc2023 registration AND 50% off our UPK recorded sessions especially curated for our TK teachers. Visit californiakindergartenassociation.org/ for more detail on these great deals! #iteacktk #iteachfirst #earlychildhoodeducator #iteachk #ckalovesteachers ... See MoreSee Less