Hurrah for October!  This traditional Halloween poem is seasonal and fun while it helps you teach rhyming and ordinal numbers. 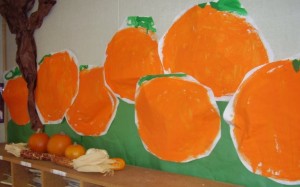 The first one said, “My, it’s getting late.” (put palms to cheeks)

The second one said, “There are witches in the air.” (point to sky)

The fourth one said,  “Let’s run and run and run.” (pantomime running with arms at sides)
The fifth one said, “It’s just Halloween fun!”
“Woo-oo-oo” went the wind. (move hands back and forth)

And out went the light (clap hands)

And the five little pumpkins rolled right out of sight. (circle one forearm around the other)

Looking for more Halloween ideas? Check out Sing the Sounds the Batman Way!, Ten Little Pumpkins – Counting in Kindergarten is Just Halloween Fun!, and The Feet on the Witch – A Halloween Song.  Happy Halloween!

What fun things are you doing to get ready for Halloween?

« The Feet on the Witch – A Halloween Song
Sing the Sounds the Batman Way! »

Join us Wednesday, February 8th for another Teache

Calling all TK Educators in California! Join the #

Calling all TK Educators in California! Join the #mytkjourney Blog Contest now! Share your TK journey and make your footprint in shaping the future of TK classrooms! Submit your blogs on one of the 4 topics at www.learning-genie.com/blog-contest/ by Feb 28th. Be 1 of 12 winners, inspire and enrich fellow TK teachers!--#CKA #TK #learninggenie #ckalovesteachers ... See MoreSee Less

If you have ever had the honor of being in one of Dan’s sessions, you know it is a life- changing experience! He always gives 100% and we LOVE having him at #ckc! ... See MoreSee Less
View on Facebook
· Share

It was GREAT having you at #ckc2023 Enter the Blog contest!! 👇🏼👇🏽👇🏾 get more info👇🏾👇🏽👇🏼We had an amazing time at the California Kindergarten Conference hosted by the California Kindergarten Association! It was an opportunity for all teachers to recharge their batteries for 2023. We also promoted our #MyTKJourney Blog Contest, co-hosted by Learning Genie and CKA. Click here to learn more: www.learning-genie.com/blog-contest/Let's empower teachers for 2023! #ckc2023 #MyTKJourney ... See MoreSee Less